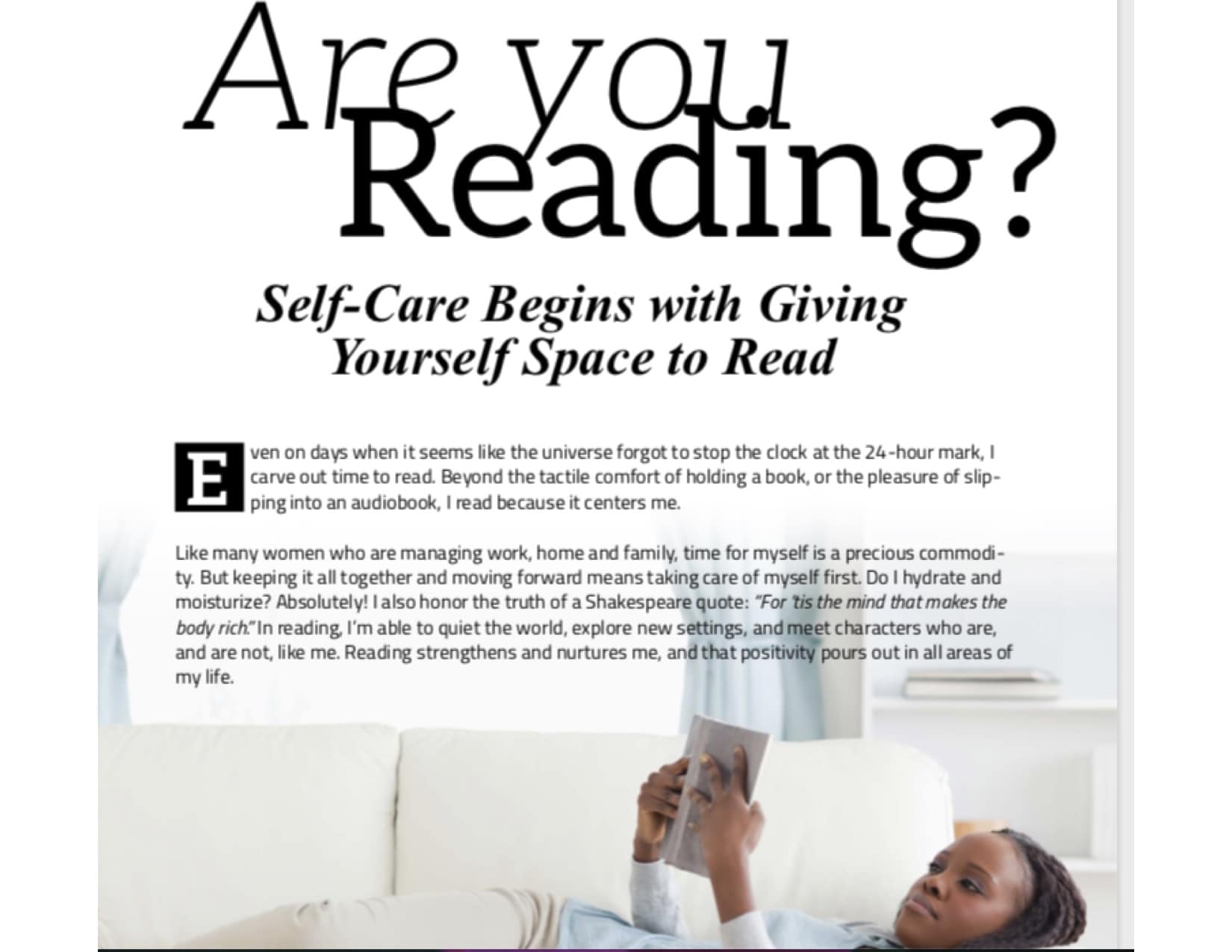 28 Apr What Are You Reading

As it turns out, there’s science about the direct correlation between reading and the quality of life.

In a 2018 study published in the Journal of Experimental Psychology, researchers revealed that reading fiction improves social cognition, which is our ability to evaluate the nuances of social interaction. Enhanced social-cognitive skills can positively impact social connection across the life span. That, in turn, improves overall well-being, forestalls physical illness and increases longevity.

We wanted to know how every day, dynamic women incorporate reading into their lives. Here’s what they said.

CARLA FOUNTAIN has been a basketball official for twenty- two years—formerly with the WNBA and now as an NCAA Women’s Basketball Division I official. In life off court, Carla stays in motion. Along with former co-workers, she’s recently launched a podcast—You Gon’ Need A Lot Mo’ Wine—which explores marginalized issues communities often don’t address because of uncertainty regarding how to engage. In an upcoming episode, the group looks to identify change-driven stakeholders when megachurches are planted in neighborhoods mired by poverty. “I travel a lot during basketball season,” Carla said. “So, I will often stop in a bookstore in the airports.” She’s reading “The Mind of Christ” by T. W. Hunt and says it’s propelled further examination of the Bible.

by Antoine de Saint-Exupéry. Published in 1943, the novella’s longstanding appeal with adults and children stems from its illustrations, intergalactic travel, and how those elements converge into the universal theme of human nature. “I hadn’t realized that The Little Prince was more of a fable,” Brighton said. “It taught some very deep lessons in very simple narration.” Brighton feels as if she travels in books to places and times that shift her thinking and build empathy for people with whom she may not share similarities.
“It makes me different and better for it,” she said. “It makes me a better writer.”

KAREN DANIEL was an elementary school teacher for forty years before retiring. Because she’s an active proponent of empowering people, Karen couldn’t sit still and do nothing. What began as volunteering to mentor people with a history of substance misuse became a full-time job with Georgia Council on Substance Abuse. Reading at night is something Karen looks forward to, and she’s currently engrossed in “America’s Original Sin”. Written by Jim Wallis, this non-fiction book is described as, “a prophetic and deeply personal call to action in overcoming the racism so ingrained in American society…speaks candidly to Christians—particularly white Christians—urging them to cross a new bridge toward racial justice and healing.”

“We are a nation that still refuses to look at white privilege and its effect on people of color,” Karen said. “It is this very disparity that has created the haves and the have nots.” d

DEBBIE FROM is the founder of Give a Folk, a storytelling company that produces live events to foster community engagement. Give a Folk’s goal is to build stronger community ties through stories that bring folks together around a common cause. Intentional about creating her reading time, Debbie said, “It’s an escape, almost like my meditation.” She’s reading “Dear Evan Hansen: The Novel”,a young adult novel co-authored by Val Emmich. It’s a coming-of-age story where a lie unravels into the complexities of grief, achieving authenticity and facing loneliness, despite living in a socially connected world. The young adult genre resonates with Debbie because it’s a lead to meaningful conversations with her three teens.

Tiffany Courtney is a freelance writer and storyteller, and a window into how teenagers may experience the world, and it former asset manager for a Fortune 5 real estate investment trust. She lives in Philadelphia with her wife and child.