Internships provide a valuable step in launching a strong, vibrant career path. They provide experience alongside education, allowing students to explore various industries before they make a final decision about what they’d like to do after graduation.

Career Mastered spoke with Madeline Kidd, a 23-year-old studying Entertainment Arts and Digital Filmmaking at Detroit’s College for Creative Studies, to share some insight about just how valuable internships can be.

Madeline participated in two internships. The first one was with Eldorado General Store in Corktown in Detroit, Michigan, and the second was with a video series called The Pursuit of Passion. Madeline eventually expanded her work on The Pursuit of Passion to become her senior thesis. Her internship at Eldorado General Store included fashion photography, and both internships helped her connect to artists and creatives around Detroit. Her internships contributed to her career by providing real-world experience and projects for her portfolio. 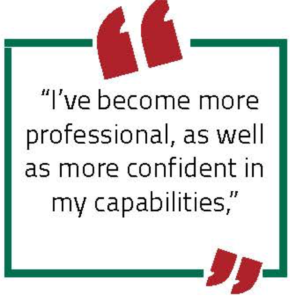 “I’ve become more professional, as well as more confident in my capabilities,” Madeline told Career Mastered. Madeline emphasized that the goal of an internship is not landing a job immediately, but to build your network and grow in your abilities.

Here are Madeline’s top four tips for choosing an internship:

In addition to talking to Madeline about internships, Career Mastered discussed her experiences with diversity and inclusion in the workplace as a little person. Madeline is passionate about using her career in the creative and entertainment industry to challenge the conventional images of beauty and worth that are so omnipresent in the media. She wants to combat generally misguided information about people with differences. She uses her own experiences with discrimination, noting that “being a little person is often portrayed as a joke,” as inspiration to continue pushing for change.

In an attempt to increase departmental enrollment, a well-meaning economics professor once told Hadley Roy that economics was the key to world domination. His ploy worked and she dropped her history major immediately to focus on econ. While clearer heads eventually prevailed and Hadley abandoned her hopes of ruling the known universe, she kept the economics major. She settled on strategy as an alternate career path that would still allow her to tell stories and work with data.